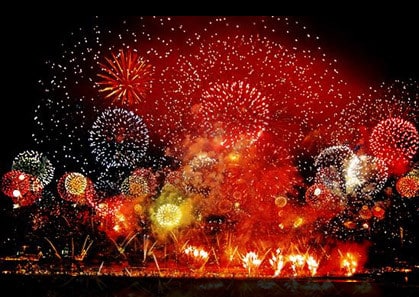 The twelve steamships which floundered off the last night of 2013 in Funchal contributed to the fire show Fireworks on New Year , the most important tourist attraction of the island of Madeira , with the theme ” cruises ” that lasted eight minutes.

Thousands of residents and visitors chose the most varied places to watch the Evocative of the 100th anniversary of the construction of the port of Funchal process spectacle, in which the Government has invested about 900 million euros.

As is tradition , sounded when the clock strikes 12 , the ships , most anchored in the bay of the city , officiated setting the mood for the start of the fireworks display that filled with light and color the skies of the amphitheater of Funchal .
In Madeira , the ships were ” Aurora ” , ” Balmoral ” , ” Saga Sapphire ” , ” Aida Blu ” , ” The World” , ” Braemar ” , ” Marco Polo ” , ” Aidastella ” , ” Mein Schiff1 ” , ” MSC Fantasia ” and ” Saga Ruby ” , plus the steamer ” Funchal ” who returned to the city that gave its name to one of the most iconic nights in Madeira.

According to the Administration of the Harbours ( APRAM ) , a concentration of vessels tied the record achieved in 2007 and brought to the passage of the year about 30 thousand tourists to Funchal, between passengers and crew .
In this performance , conducted by Macedo ‘s Fireworks , about 17 tons of fire were used , a total of 5,520 pounds of explosives , which involved a total of 61,580 shots 48,776 pieces of fire Fireworks , distributed by 34 stations , 22 in the amphitheater Funchal eight on the waterfront and downtown and four others placed in the sea.

Since the focus was the ” Cruises ” , there was a strengthening of parts placed on offshore platforms that have contributed to the beauty of the show ending , as usual , with an apotheosis of light and noise.

In 2006 , the firework display in Madeira , which traditionally marks the New Year , was considered by the Guinness World Records ” as the largest show of fire firework World ” .

The Department of Culture , Tourism and Transport Madeira points to an occupancy by the end of the year 86 per cent, while the Commercial Industrial Association of Funchal speaks of a rate between 85 and 90 percent in units from the south coast , there are some that are crowded .

After the fireworks display , the party goes on into the night in households, hotels and homes in other areas of fun organized special programs to welcome 2014.

Highlighting the initiative organized by the Regional Secretariat of Culture , Tourism and Transport in the Sea Square, next to the port city , which was mounted a stage that recreates a kind of dance room , an open enclosure at people who are prepared to receive about 10 000 people.