Santana is composed of six parishes (Arco de São Jorge, Ilha, Faial, Santana, São Jorge and São Roque do Faial), lives mainly from agriculture, handicrafts and tradition. The mountainous landscapes are dominated by the lush green that characterizes the Laurissilva Forest. Indeed, some of its landscapes are classified as World Heritage, which is certainly a strong contribution to maintaining its beauty.

With so many attractions, it is normal that a large part of the tourists draw a circle around Santana and highlight it as a mandatory point of visit. And yet, a new offer was added to an already attractive area – the Madeira theme park. Opened in October 2004, this park, which can be visited all year round, is divided into several nuclei and includes numerous attractions for young and old-tourists and inhabitants of the island – linked to the history, traditions and culture of the people of Madeira.

Every year in July, a famous festival of traditional music and dancing is held in this area, which attracts real crowds. The event, known as ’24 Hours To Dance’, consists of performances by folklore groups from all over the world.

Not far from Santana are the burnt ones, an important point for one of the most spectacular walks towards the Green cauldron.

The municipality of Santana, situated on the north coast of Madeira Island, has an area of 96.2 km2, where there are about 8 800 people.
Due to the fact that the council had been inaccessible for a long time by sea and land, its inhabitants preserved features that did not suffer outside influences. An example of this isolation is the architectural style of their typical houses with a ceiling covered in colmo, better known as “casinhas de Santana”.

Here you can visit the Madeira theme park and the ship’s Rock Nature Reserve.

In June 2011, the municipality of Santana received the UNESCO distinction of “Biosphere Reserve”, recognizing the richness of an ecosystem where it seeks to reconcile the conservation of biodiversity and its sustainable use. This reserve includes a terrestrial component, corresponding to the entire surface of the municipality and a marine component, which presents a great diversity of natural and human values, landscape, environmental and cultural values of unique local, regional, national and international interest.

In Santana you will find the biosphere routes that extend for more than 120 km and allow you to appreciate the vast natural heritage, contemplate the landscape environment, enjoy nature, know the cultural richness of the places and engage with the local population. Here you will find the walking paths of the Red Peak Road, taken from the King and taken from the Green cauldron.

Santana is a great starting point for many excursions by levadas that will take you through the laurissilva forest to the burned, Pico das Pedras and, for those in very good shape, the highest point of the island – the Red Peak, at an altitude of 1861m with absolutely stunning views.

Along the main road you will find Quinta do ferret surrounded by vineyards at the top of a cliff with sensational views of the coastline and the ocean. Because it is managed by the Madeira Wine Company here, you can, every year in the first weeks of September, see how Madeira wine is traditionally made. 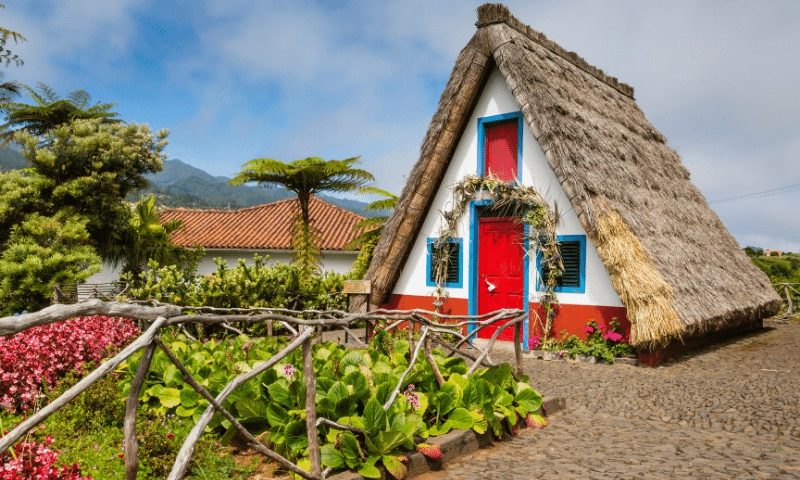 Travels to Madeira, what to do when you arrive