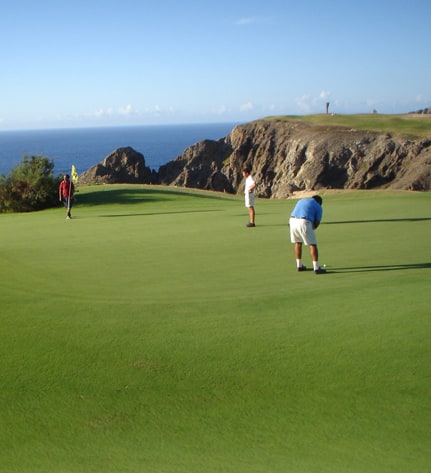 Porto Santo Golfe , was recently honored with his presence in the ” Top 100 ” ranking of European golf courses , according to the magazine world renowned specialty ” Golf World ” .
According to the latest edition of British magazine , Porto Santo Golfe ranks 75 . Place among the top hundred courses in Europe , a classification made on the advice of many experts and voting of the magazine , and especially by journalists golf .
The first time that the field of Porto Santo appeared in the rankings was in 2009 when he was awarded the 94 . Th position . This position improved in 2011 , to 91 . Place and this year has a sharp rise of 16 places , now occupying the No. 75 spot .

This distinction to the beautiful countryside idealized by the Spanish champion Severiano Ballesteros , is even more important if we take into account that there are in Europe at the moment , around 6,900 golf courses (there were 6,740 in 2011 ) , and therefore this position and says the quality of the field , that in good time the Madeira Regional Government decided to build on the island of Porto Santo , to help in its development and promotion .

Noted that , among the 100 fields in this list , appearing over 12 Portuguese courses , six of which the Algarve and another six in the Lisbon area and center . This time the Porto Santo Golf is the only insular field ‘s list , and is 11 . Between 88 º Portuguese countryside . The Portuguese countryside best positioned in the ranking, is the Monte Rei , Algarve , which comes in 18 . º position , followed by the Eighth Dunes in Quinta da Marinha , which ranks 20th . Place and Onyria Palmares also Algarve , which amounted to 23 . º put Europe. Portugal is well with a very good presence in this ranking , which is not surprising , after this year have been awarded the best golf destination in Europe , the World Travel Awards .