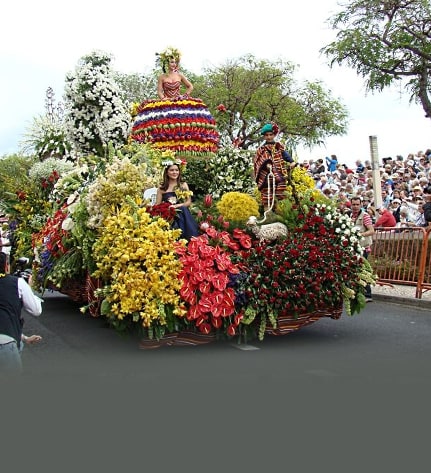 With the arrival of spring, the city of Funchal turns into a inebriating floral stage filled with enchantment.

The magic of this event starts on Saturday morning, with the Children’s Parade, on which, hundreds of children dressed for the occasion dishallow to the Municipio Square where, a beautiful flower mural is built, symbolically named “the Wall of Hope” (Muro da Esperança).

On Sunday afternoon, the streets of downtown Funchal will be filled with music, colour and soft aromas, through the sumptuous parade comprised by several floats, which harmoniously combine numerous flower species with blooming decorations full of creativity.

Alongside these events takes place a set of ludic and recreational activities filled with charm and symbolism, such as, the construction of delicate floral carpets of unrivalled beauty along the main streets of Funchal, as well as musical concerts, folklore performances from Regional groups, shop window ornamentation and the Flower Exhibition in the Largo da Restauração.

Due to its location Madeira has been an important port of call on the sea routes between Europe and Africa and the Americas, and continues to be one of the busiest ports of call in Europe.

Flower species native to many different parts of the world bloom in Madeira since the island has a unique climate in which species from both tropical and cool regions flourish.

The Flower Festival is held in honour of spring and is a celebration of metamorphosis and rebirth, fertility and the abundant flowers that brighten the island with colour and make the air heavy with their intoxicating scent, adding to the attraction and fame of this overseas tourist destination.

Once again this year Funchal will be garlanding itself in blooms to pay tribute to the flower in one of Madeira’s biggest festivals. In this homage to spring, which this year will be held in May, appropriately called the month of flowers, Madeira Tourism, the organiser of the Flower Festival, aims to delight tourists and residents by giving the event a genuinely innovative twist and spreading the celebrations over a longer period.

The famous floral carpets will be created along the central promenade of Avenida Arriaga. In the north garden of the Palácio de São Lourenço visitors will be able to admire a floral sculpture of the Madeiran endemic species, Laurissilva.

The traditional flower exhibition will take place in Praça da Restauração, followed by the usual Flower Market, enveloping the city centre in a unique ambience of Nature’s fragrances, accompanied by various events which will culminate in the construction of the Wall of Hope by the children of Madeira and the grand flower festival parade. So come on, take advantage of the mild climate and discover all the world’s flowers in this world of flowers.

This event, which has taken place for over three decades, combines childhood innocence and the delicacy of flowers in a ceremony calling for peace in the world. On Saturday morning, over a thousand children, each bearing a flower, parade from Avenida Arriaga to Praça do Município to place a flower in a wall charged with symbolism, the “Wall of Hope”. The ceremony takes place this year on May 03rd and ends as usual with the release of doves and a children’s show.

The Flower Market, initiative included in the event since 2007, turned out to be an excellent asset. In addition to raising awareness to the countless existing ornamental and floral species, this market also allows for locals and visitors the acquisition of the displayed plants, in a picturesque setting where traditional saleswomen, known as the “florists of Madeira”, present themselves dressed up with regional costumes.

This floral show is held in the very center of Funchal, more exactly at Largo da Restauração, located at the back of iconic Palace of São Lourenço, as an extension of the exhibit held at the former Funchal’s Ateneu Comercial, dating back dating back to early fifties of 20th century, continuously allows to enjoy the finest flower specimens examples of all kinds of flowers, cultivated all around the island and grown with much care and devotion by its farmers. The flowers exhibited in the parade are judged under various categories and the best are awarded prizes by a panel of experts.

The abundance of local flora has greatly contributed to the establishing of this art form. This traditional creation of flower carpets thrives a little bit throughout the island and had its origins in the celebration of religious holidays. Due to its undeniable beauty and detail, for some years until this day, the flower carpets began to be reproduced on the streets for the Flower Festival festivities, establishing alongside the floral sculptures, a major contribution to the magnificence of the city’s adornments.

The Flower Festival Parade, which has been held since 1979, is one of the most striking and eagerly anticipated events of the entire Festival by tourists and residents alike.

This event is famous for the splendour and elegance of the floats and costumes of the hundreds of participants, mostly children, copiously adorned with numerous, varied, magnificent flower species, that parade along a planned route to the sound of festive music accompanied by sometimes simple, sometimes elaborate choreographed routines.

The Flower Festival this year has as its theme: “Madeira – the route of flowers”. The Parade, made up of various groups totalling some 1200 participants, will start at 4pm on Sunday 04th of May, following a route from Avenida Sá Carneiro to Praça da Autonomia.

Due to its location Madeira has been an important port of call on the sea routes between Europe and Africa and the Americas, and continues to be one of the busiest ports of call in Europe. Flower species native to many different parts of the world bloom in Madeira since the island has a unique climate in which species from both tropical and cool regions flourish.