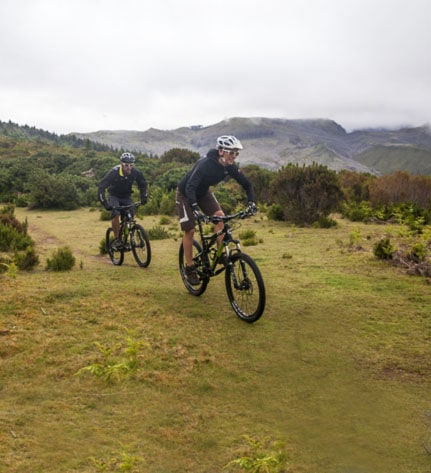 Knowing the island of Madeira in cycling – Exercising and admire the breathtaking scenery of Madeira .

If you are a lover of sport and bikes , this is undoubtedly the best ways to meet and explore the island of Madeira , especially their saws. Madeira virtually no bike paths but in return the island offers great roads , paths and trails scattered a bit everywhere . An experience you will never forget , is to traverse the famous Levada of the island using a bicycle .

There are also several tourist companies that offer various types of tours organized cycling adventure around the island , with varying degrees of difficulty and even in the most varied forms: mountain biking, Freeride , Downhill and Crosscountry . Whether in the city or the countryside , you are guaranteed great time for lovers of two wheels .

If you want to go alone or just in the company of your friends and business BikeBus Pearl of the Atlantic Cycles provide the shuttle service which ultimately make it much easier especially for groups .

Is the hills of Madeira , the adrenaline is guaranteed , especially for the more radical . Ss who love heels , can visit the Bike Park in Porto Moniz , an area dedicated to mountain bikes , with jumps , circuits and tracks ” dirt jump ” and “pump tracks” for all levels of expertise.

There are three well-known and crowded lanes in Ponta do Pargo , one near the home of the National Champion in MTB , Emanuel Pombo .

There are other trails with varying degrees of difficulty , for example in the area of Fonte do Bispo has many dirt roads and up are flagged for mountain biking in the area is easy to trace a route with more than 25 Km when on land .

We leave here some places where you can venture :

Zone of Funduras – also has some roads signposted MTB

Rochão – The descent begins at the junction of Rabaçal (but on the other side of the road ) and ends in Calheta .

Trompica – In the upper area of Ribeira Brava

Descent loin Moor (starts on the road that connects the Encumeada the Paul da Serra) and ends at the site of Candelaria in the area of high Tabúa .