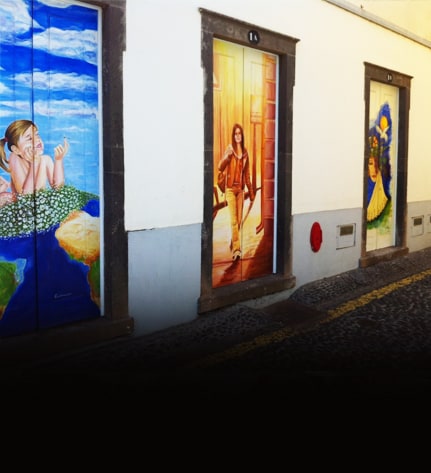 The Street of Sta Maria in Funchal was a sad street with some abandoned houses and semi destroyed , where some restaurants struggled to impose its space and its gastronomy .

The redevelopment of that old town gave the appearance of new ideas and that paid off in a short time .

With imagination and some low-cost resources , transformed a street into a tourist attraction and reference throughout the city , only talking , everywhere , on the street of painted doors .

And this is what happened , nothing as simple as this: the street closed to traffic, increased the number of bars and restaurants with terraces and some embellished facades , inviting artists who used the doors as canvases , painting them or making sculptures , where bystanders become part of a gallery.
Today , it is a meeting place mandatory and became an icon of the city .

It is a project to open the doors of the city of Funchal to art and culture. They were not “virtual entrances” rather old and forgotten. These doors are from abandoned shops and deteriorated areas that take on new life, in order to sensitize people filling the streets with cultural and artistic events.

These interventions include all the visual arts, from painting, sculpture, photography, video, music and writing.

It is an intervention that is not intended vandalize or be transgressive with the everyday life of the city. Although every artist always wants to be innovative and “groundbreaking”. This is part of a “wakeup call” that any work of art exerts on the audience who sees it.

View the project and the painting doors here:  http://www.arteportasabertas.com/