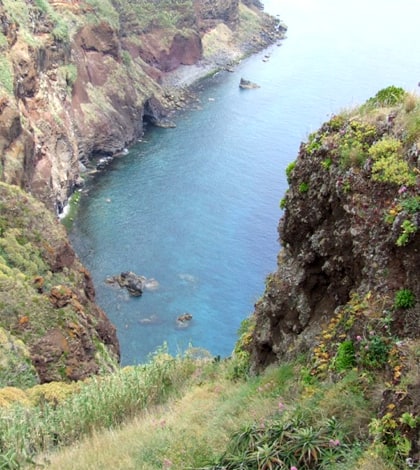 The creation of the Partial Nature Reserve Tern was the result of a concern felt by a group of islanders , that realizing the potential of this site , found that the same was as the disturbing phenomenon of depletion of the marine environment . Became urgent , on the one hand , prevent the progressive desertification of the coastal seabed of Madeira , and on the other , contribute to the faunal repopulation of adjacent areas .
Known for the high clarity of its waters ( allowing observations to more than 20 meters deep ) , the Reserve has a high biodiversity with a wealth ictiológica very significant . By its geographical location and especially for its biological richness and transparent waters and clean , has great ability to use the point of view of recreational, educational and scientific . It is an area where streamlines amateur diving and acts as a strong attraction for the displacement of countless amateur divers to the region .

Garajau Natural Reserve
The reserve funds are rocky nature until approximately 22 meters depth. From here , become fine sand or shell ground . The area of transition from sandy to rocky substrate is quite marked and steep , with some steep walls . The funds furniture reveal sometimes sizeable boulders or some rock chick.
The seabed is populated by an abundant and resident wildlife . The grouper Epinephelus marginatus is the flagship species of the reserve , attracting and arousing the curiosity of divers . 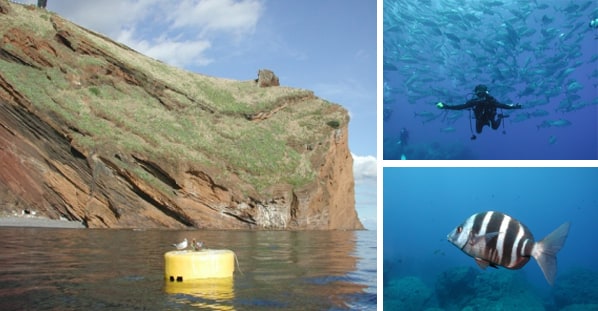 HOW TO VISIT ?
Access to Nature Reserve Partial Tern is by land through the Lazaretto Pier or Beach Tern .
Under the Environmental Education is a program of visits to the Reserve , where you can join any group of pedagogical character.

The Partial Nature Reserve Tern is located on the southern slopes of Madeira Island , east of Funchal , occupying a stretch of coast approximately six miles and covers an area of 376 hectares . Lies between Ponta do Lazaretto and Ponta da Oliveira , the line of high tide and the water depth of 50m south or in case of doubt , never before 600m from shore.

Habitats
The Partial Nature Reserve Tern combines a variety of factors that do provide habitats that are representative and important for in situ conservation of biodiversity .

Marine fauna and flora
In rocky areas following the terrestrial field at the level upper shore are thinned periwinkles Littorina striata and lichen Verrucaria Maura resembling tar spots . In isolation begin to appear snails Gibbula sp . The lower floor of the upper shore is marked by the appearance of colonies of barnacles Chthamalus stellatus . Also characteristic of this level , but infrequent , is the lichen Lichina pygmaea . Groups of limpets begin to emerge , first the limpets Patella piperata , then Patella aspera and Patella candei extending to the lower shore . This appears crab – goat Grapsus adscensionis .
At the level of the intertidal there is a higher diversity of species of flora and fauna . In some places there are tracks along the coast of the green alga Enteromorpha sp . At this level there are several enclaves which are formations of calcareous algae Lithophyllum sp . or Lithothamnion sp . to coat the walls of the pools . In some puddles are also dense clumps formed by some colonies of algae. Here also are typical of some species infralitoral floor as is the case of anemones , sponges and echinoderms Paracentrotus lividus and Arbacia lixula . The fauna is characterized by fish and gobies Mauligobius maderensis Parablennius parvicornis and the shrimp Palaemon elegans of – puddles .

Garajau Natural Reserve
The rocky recesses , which remain more moist and dark , are the preferred habitat of some species of crustaceans Pachygrapsus spp . and Eriphia verrucosa , gastropods Monodonta spp . and Gibbula spp ..
Infralittoral the number of organisms increases , as there is now greater plant cover is dominated by algae Padina pavonica , Asparagopsis armata and algae of the genus Jania sp . , Corallina sp . , Ulva sp . , And consequently a more diverse fauna that includes crustaceans amphipods , isopods and decapods , sipunculídeos , polychaete annelid and gastropod molluscs that live among the algae and sediment mass retained by them.

In areas less populated by algae there is a very varied sessile fauna including sponges Aplysina aerophoba , Chondrosia reniformis Batzela inops , Anemonia sulcata and anemones Aiptasia mutabilis , star -fish among other Marthasterias glacialis and many species of fish . Within the mollusc species are of note Lima lima , Hexaplex trunculus and Spondylus senegalensis . The polychaete Hermodice carunculata is also very abundant .

Geology
The reservation area , facing south and west limited by Ponta the Lazaretto and east by the Ponta da Oliveira , is characterized by a high rocky coast and regular . At sea level the coast consists of small pebble beaches interspersed with rocky areas . This area does not flow into streams or other water courses relevant . Occasionally can be seen some waterfalls that flow directly to the sea.
The coastal system of the reserve consists of a rocky shore quite exposed to marine hydrodynamics . Along the coast about 7 miles 7 caves are open , not submerged , and 19 small pebble beaches , 2 of which are large and used by bathers . Along the coast the bedrock is prevalent . Much of this substrate has a steep slope , but also are several rocky platforms , and some various enclaves that become tide pools during low tide when the platforms are emersed . In the adjacent sea are some extensions rocky islets and rocks emerged and submerged almost connected to the coast . Funds are rock and sand .
Funds are rock basaltic nature to a variable depth , usually between 14 and 30 meters , from which become fine sand or crushed shell . The area of the roll, a transition area of the bedrock to sandy, is usually quite marked and steep .

In part overlooking the reserve there is a viewpoint much visited by tourists , known for Gazebo Pinnacle . This area called Pinnacle is included in the Natura 2000 network and is important in some marine birds , such as the shearwater and tern , and some terrestrial molluscs ( snails ) . It has about 30 ha , from sea level up to 310 meters in altitude , and consists of ” walls ” of gravel and slopes colonized by vegetation small .

In order to prevent the desertification of the seabed of the coast of Madeira Island , a group of diving enthusiasts proposed the creation of a nature reserve . Thus , in 1986 created the Partial Nature Reserve Tern .
Since 1996 , the Natural Reserve Partial Tern has a small support center , located on its western boundary , more precisely in the Lazaretto Pier . The center was built with the financial support of the European Community through the program POSEIMA and aimed to improve the management of the reserve and contribute to its effective protection through adequate surveillance .
This center serves as a location for information to the public and has a space for the reception of visitors and divers users reservation where documentation can be found regarding this protected area and the marine environment in general. It also has a small station for filling diving cylinders .

Activities Allowed / Blocked
The legal framework for the protection of the Partial Nature Reserve Tern establish a marine protected area stretching from the tip of the Lazaretto and Ponta da Oliveira , the line of high tide and the water depth of 50m South

Throughout the reserve area is allowed :
– The amateur diving ;
– Nautical activities with primarily non-motorized sports .

Is prohibited throughout this area :
– Harvesting, capture, killing or possession of copies of living beings , as well as the destruction of their natural habitats ;
– Abandonment of debris or trash ;
– The release of water from washing vessels , as well as wastewater and household detergents , sea or land ;
– The practice of noisy activities ;
– The exercise of any fishing activities , commercial or sport ;
– Spearfishing ;
– The use of gill nets , fencing and drag, except those who are employed in catching live bait .