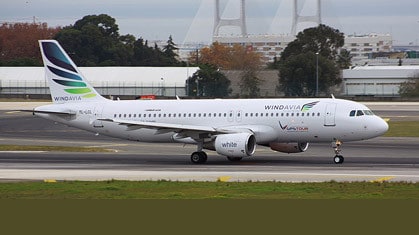 The airline did Windavia Wednesday its maiden flight . The first commercial link will be on 17 December on a trip to Madeira . Then shall make trips from Paris to Madeira , and also fly to other destinations .
The Windavia is the new Portuguese charter operator who made quart Monday the inaugural flight Lisbon – Beja -Lisbon .

According revealed at the time the director general of the company, Peter Bollinger , the charter carrier already has more than four thousand flights contracted with major tour operators to fly from Lisbon , Madeira and Paris to major destinations sun and beach in the south Europe, particularly in Algarve , Madeira , Canary Islands , Greek Islands and North Africa . Already starting next week until December 31, 2014 , according to Peter Bollinger .
The first commercial flight will be on 17 December, the date on which the Windavia , in partnership with the tour operator GPS Tours , will invite leading tour operators for lunch in Madeira , in order to promote the destination .
” From there , we start with two weekly flights Paris – Funchal in the festive season , then increase one flight per week and in the summer, there will be four weekly flights ,” forward Peter Bollinger .

Paris to Madeira flight
The Windavia , who claims to have ” more than EUR 50 million in signed contracts ,” has also reached agreement with leading Israeli operators . Therefore , from the beginning of the high season , will begin flying once a week to Israel , increasing the number of weekly frequencies for two at the peak of summer.
The Windavia fly with four Airbus A320 aircraft and is finalizing the contract for two more.