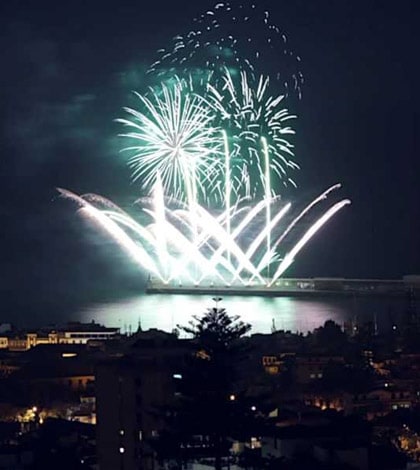 The Madeira Atlantic Festival, an event that marks the beginning of the summer season in Madeira, will this year integrate a diverse set of initiatives spread throughout the month of June, most importantly the pyromusical shows; the Madeira Music Festival and the Regional Arts Week.

The four pyro musical shows with a duration of about 20 minutes, start at 10.30pm at the entrance of Funchal’s harbor (commonly designated as “Pontinha”), taking place within the 4 Saturdays of June, on the 7th, 14th 21st and 28th of 2014.

The show which is held on the last Saturday of this month and is under the responsibility of the company in charge of all the involving logistic and therefore is not subject to the competition, taking part of the competition ceremony for the winner’s announcement and the delivery of the corresponding prize.

The Madeira Music Festival is a prestigious event that has significantly contributed towards the Madeira Autonomous Region excellence of its rich cultural offer. Promoted by Regional Secretariat for Culture, Tourism and Transport in collaboration with Madeira Cultural Affairs Department, this Festival takes place in June in a programme which intends to appeal numerous audiences proposing all type of genres, repertoires, styles and multiple performers, in order to maintain the quality that has always set the difference in our cultural calendar.

Organized for over 30 years, Madeira’s Music Festival is a prestigious event in the classical music world. The multiplicity of its offers enables the attainment of musical concerts to be held at several of the most emblematic venues such as the Casa das Mudas Art Center, Baltazar Dias Municipal

Theatre and at Santa Clara Cloister that bring satisfaction to those audiences who sought out for the uniqueness of our cultural tourism offer. From sacred music to contemporary dance, not to mention piano, Violoncello da spalla concerts and Madeira Traditional music, Madeira Music Festival has established itself as the grandiose cultural event within June’s cultural agenda which has progressively drawn the attentions of both residents and visitors year after year.

Since the 80’s that Regional Secretariat for Education and Human Resources/ Regional Bureau for Education through the Coordinator Cabinet for Arts Education has invested in Arts training in general schooling.

The range of the intervention has been extended and currently comprises a universe that goes from the pre-school to high school education. In this context, and considering the importance of overture of schools to the arts, from the stage experience to the relationship towards the public, to show the lessons learnt and the acquired skills during school, through various actions that take place in the downtown area, more specifically the Garden Party; as an example of the previous year is intended to merge into a single week, named as the Regional Arts Week which includes several events: Party in the Garden; Meetings of Art Forms; Regional Plastic Arts Exhibition and ESCOLartes (the Art of Schools).

The program includes several artistic performances in the areas of Chant, Drama / Theatre, Instrumental, Chordophones Traditional Madeiran and Dance, in addition to the Regional Exhibition of Artistic Expression, which includes painting contest.

This event, on its third edition, provides the partaking of artistic experiences and work of about 4000 students of the local primary schools and secondary schools, in collaboration with several groups in the field of Special Education, consolidation bonds between local schools and the community, in a perspective of social openness.

The Atlantic Festival is one of the most recent tourist entertainment events, which took place for the first time in June of 2002, in order to increase Madeira islands as a tourist destination and to provide its visitors the opportunity to experience one of its locals ancient tradition, the fireworks, a tradition which is lived intensively particularly during the End of Year Festivities.

It is a tourist attraction which is characterized by the combination of fireworks and music, as it consists of a synchronized show which associates musical themes in backgound. Some of the main highlights within this year’s programme are the “Beginning of Summer Music Show” by Madeira’s Light Orchestra, performance which take place on Saturday night, at the city’s pier, before and afterwards the pyromusical show.

Apart from these events other concerts and shows which integrate Madeira’s Music Festival as well as, other cultural and entertainment activities.

The Regional Bread Fair is an event organized by Funchal’s Lions Club for over 20 years which commonly takes place at Restauração Square ( Largo da Restauração) , with the purpose of raising funds for the club’s charity works. The 24th edition, of this event will include entertainment by folk groups, in the morning and afternoons of the fair’s days, and a serenade after the fireworks display.

The popular saint’s festivities are festivities which are held in several countries, a celebration historically related to the summer solstice pagan festival, celebrated on June 24th. Madeira Autonomous Region is no exception, celebrating this occasion all around the island, paying tribute in honor of the three popular saints: St Anthony, St John and St Peter.

The popular marches are main attractions which also pinpoint the neighborhood tradition of paying homage to popular saints. They are carried out across the island, particularly in the villages where there is great devotion to the honored saints.