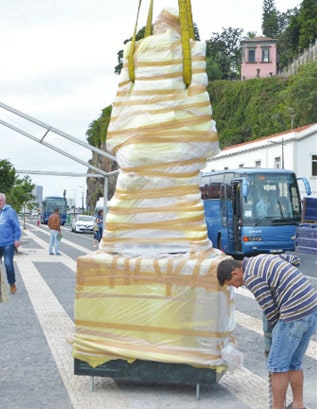 EVENTS Madeira Island News Madeira News
The international and captain of the Portuguese national football team, Cristiano Ronaldo (was born in Madeira Island), will be honored today by the Government of the Autonomous Region of Madeira, where it is natural, and will also inaugurate a statue in his honor.
In Madeira Legislative Assembly, Ronaldo will receive the Autonomic Cord Distinction, the highest award of the Region. In the Sea Square, next to the port of Funchal, the Real Madrid footballer will be perpetuated by a statue.
Ronaldo’s coming to Madeira is promoted by Jornal da Madeira, which is also the promoter of the monument which will perpetuate what is regarded as the best footballer in the world.

Cristiano Ronaldo is honored
The statue was carved by sculptor Madeira, Ricardo Veloza that Lusa confessed to being a football fan and, therefore “I advised her to persons connected with the football universe,” he said.
“A very feature player position is when brand and is free, with open arms, looking at the ball and the goal, it was precisely this position that made the statue,” said Ricardo Veloza.
Cristiano Ronaldo is honored
The statue made of bronze and is 3.40 meters tall and weighs 800 pounds and was completed in 10 days, the sculptor’s studio in Vila Nova de Gaia.
“It was a sculpture based on photograph leeds, without the sweater club or selection because it was not allowed, so also the sweater has no number,” noted Ricardo Veloza.
The Portuguese international won on Saturday night over a collective title for Real Madrid, to clinch the world champion club, a trophy that had already won in 2008, at the service of the English Manchester United.
After the game, held in Morocco, the player traveled to Madeira, in a private jet, accompanied by his agent, Jorge Mendes.
11:00 Cristiano Ronaldo will be honored at the Legislative Assembly of Madeira and 12:00 descerrará the statue in his honor.