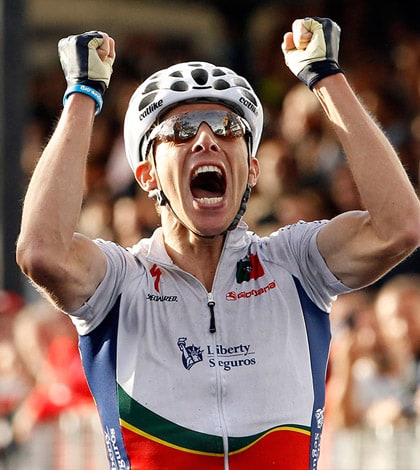 The Portuguese Rui Costa , world champion cyclist , Wood chose to begin training for the new season , which will be Paris- Nice as the most important goal of the first part of 2014 confirmed this Thursday Maritimo TV .
“Usually I come here to make preparation for the preseason , some more specific training mountain ,” said the Maritimo TV cyclist Lampre – Merida .
Rui Costa chose the island , which is natural girlfriend Carla Coelho, also because the Sea provided you with the facilities and various treatments , ” something fundamental ” to have traveled to Madeira .
Though still doing the preparation for 2014 , the world champion admits that intends to ” start the season well in Dubai ” , before participating in the Tour of the Algarve , in which evidence was ranked fifth last year .
After passing through Portugal , Rui Costa wants to compete in the Paris- Nice , ” which will be the most important goal in this early season .” The Portuguese rider is also the godfather of the new cycling team Maritimo .