Porto Santo is a city that occupies the entire Portuguese island of Porto Santo, Madeira, headquartered in a town with a name other than the municipality: the city of Vila Baleira. Is 42.48 km ² and 5483 inhabitants (2011). It is one of the six municipalities of Portugal that have a single parish, which has the same name. The city closest to it is to Machico on Madeira Island, situated southwest. 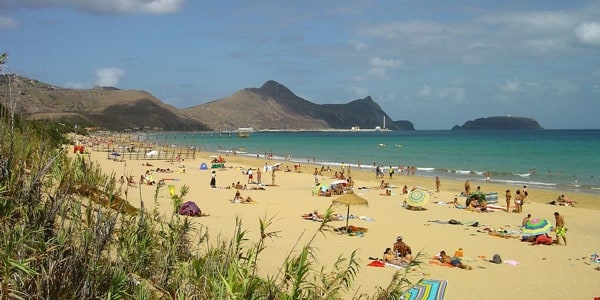 Porto Santo was the first Portuguese discovery in the 15th century. This island marked the beginning of the great age of the discoveries launched by Prince Henry the Navigator.
Years later, Christopher Columbus stayed on the island for a while and prepared his voyage of discovery to America.
Porto Santo was discovered in1418 by the Portuguese mariners João Gonçalves Zarco, Tristão Vaz Teixeira and Bartolomeu Perestrelo, who was later appointed the first Capitão Donatário of the island.
Some years later, Christopher Columbus stayed on the island for a while and married one of Perestrelo’s daughters.
In 1446, Prince Henry the Navigator donated Porto Santo to Perestrelo. It was promoted to municipality in 1835.
In August 1996, its capital, Vila Baleira, was made a city.
There are two theories as to the origin of the name Porto Santo. They agree on the event that gave rise to the name but differ on the date and origin of the navigators.
According to a folk legend that dates back to 1418, João Gonçalves Zarco and the other mariners gave it its name because the island gave them shelter during a terrible storm.
The second version, which has historical confirmation, says that in the lower Middle Ages, a vessel found safe port on this island after a violent storm. This confirms that the island had already been named Porto Santo before the Portuguese began settling there in 1418.
There can be no doubt about the year when the Portuguese mariners Zarco and Tristão Vaz Teixeira arrived in Porto Santo – 1418. It was this voyage and this island that marked the beginning of Portugal’s overseas discoveries.
Another important aspect of the island’s history is the fact that Christopher Columbus lived here after marrying Filipa Moniz, daughter of Bartolomeu Perestrelo. Colombus, the Genovese discoverer, prepared his voyage of discovery to America in a house in the centre of Vila Baleira, today Casa Museu Cristóvão Colombo.

Porto Santo is the smallest inhabited island in the Madeira Archipelago. It is situated in the Atlantic Ocean, in the extreme south-west of Europe.It is a Portuguese island, therefore part of the European Union.

Climate
The climate in Porto Santo is dry and stable. The temperature does not vary much between seasons and so we can normally go to the beach all year round. The sea around the island is calm and crystal clear.