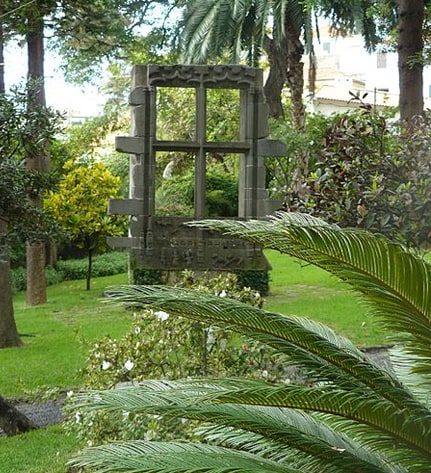 Quinta das Cruzes is one of the largest “Quintas “with historic tradition in the bay of Funchal, linked to the family of the first Donatory Captain in the late fifteenth, early sixteenth century. A small building, started by Joao Goncalves Zarco (1425-1467?), was increased by his son João Gonçalves da Câmara. This house remained in the family until the mid seventeenth century, moving through marriage alliances, to the Lomelino family until the late nineteenth century.

The is now harmonized by major works undertaken in the eighteenth and nineteenth centuries. Like many of the old local Quintas, it has a chapel, in this case the invocation of Our Lady of Conceição, was probably finished in 1692. Still a pleasure dome , where they spent free afternoons and watched the sea and the street, where the news came from.
In the tradition of recreational Portuguese farms, this is essentially a unit of leisure and non-agricultural, with large garden where rare species were gathered, brought from various corners of the world.
The Museum opened in 1953, joining the initial collection of decorative arts owned by César Filipe Gomes, a collector of Madeira. It was throughout its history, enriched with other donations like that of John Wetzler. As a n open collection of Portuguese and European decorative arts, it was increased by several donations and acquisitions until the present day.

Quinta das Cruzes
Overall, still a collection of works of Indo-Portuguese art , more generally, with copies of Goa from the mid-seventeenth and eighteenth centuries, or a Japanese counter Namban from the late sixteenth century.
In sculpture, it should be given prominence to the set of nativity figures of clay, mainly produced in Portugal in the eighteenth century, with emphasis on some of probable local production at the same time. Also reference should be made to the Flemish altarpiece, the Brussels region of the late fifteenth century.
The Museum has a collection of archaeological and epigraphic, sixteenth century demolition of parts coming from above Funchal along the nineteenth and twentieth century, built in the garden of the Quinta a montage of romantic flavour.
The garden, all of it snaked by cobbled paths typically Madeiran rolled stones along the beds of flowers or on walls, we are surprised by fountains and other water games, such as that still fresh mid-eighteenth century.

Education
The Museum has educational services with their own technical support liaison work with various public, children, youth, elderly and special needs.

Library
Its collection of documentary and bibliographic study support the collections, the history of Madeira and Museology, being made available to researchers, teachers and students to search for academic papers.

Shop
On the Reception and Museum Shop, informative material such as newsletters, scripts, postcards, posters, brochures about the Museum, its collections, or seasonal events, is available .Also the sale of reproductions of some parts of collections or other museums articles in the region.

Cafetaria
The Museum has in its garden terrace, a café for visitors.

Transports:
Public buses: 15A e 50
The museum is a short walk from the city centre