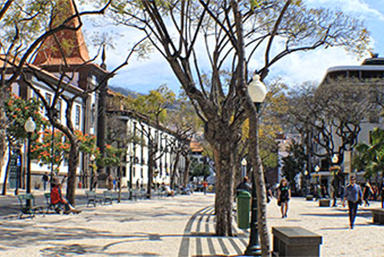 Madeira News TRAVEL
Also known as Madeira Free Trade Zone, was created formally in the 80’s as a tool of regional economic policy. It consists of a set of incentives, mainly of a tax nature, granted with the objective of attracting inward investment into Madeira, recognized as the most efficient mechanism to modernize, diversify and internationalize the regional economy.

international business centre of madeira
The decision to create the International Business Centre of Madeira was the result of a thorough process of analysis and study. Other small island economies, with similar geographical and economic restraints, had successfully implemented projects of attraction of foreign direct investment based on international services activities, becoming therefore examples of successful economic policies.

The IBC comprised initially four main areas of activity: the Industrial Free Trade Zone, the International Shipping Register of Madeira – MAR, the International Services and the Financial sector. The later sector was however not included in the regime approved for activities licensed as of 2003 and has therefore been discontinued as of the end of 2011.

Several activities are undertaken within these different sectors, such as trading, consulting and marketing activities; e-business and telecommunications; the holding of participations through a Portuguese pure holding company; the holding of intellectual property; manufacturing, assembling and warehousing activities within the industrial park as well as the registration of commercial vessels and yachts in MAR and the undertaking of shipping and charter activities.

Since the beginning, favorable operational and fiscal conditions have been offered in the context of a preferential tax regime, fully recognized and approved by the European Commission in the framework of State aid for regional purposes and under the terms of the Ultra-peripheral Regions set in the Treaties, namely Article 299º of the Treaty of the European Union.

The IBC of Madeira has therefore been fully integrated in the Portuguese and E.U. legal systems and, as a consequence, it is regulated and supervised by the competent Portuguese and E.U. authorities in a transparent and stable business environment, marking a clear difference from the so-called “tax havens” and “offshore jurisdictions”, since its inception.
In 2007, the European Commission authorized the new State aid regime for new companies incorporated between 2007 and 2013 and the extension of the deadline of the tax reductions until the end of 2020.

The present tax regime is outlined in Article 36º of the Portuguese Tax Incentives Statute.

The Contribution for the Local Economy

Available data clearly demonstrates the contribution that this development programme has brought to the local economy over its 20 years of existence: