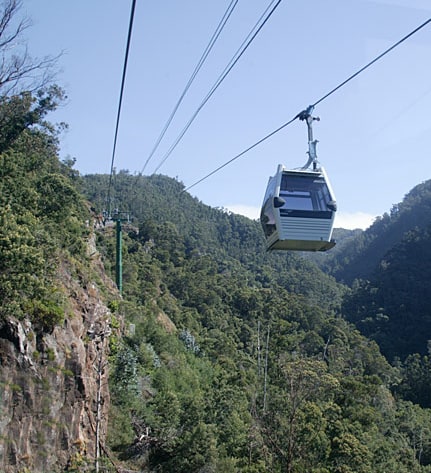 Visiting Funchal? Then come and take a ride on Botanical Gardens cable cars!

The Botanical Garden Cable Car, is situated in the Inn Quinta do Bom Sucesso – Madeira Island – seven minutes from the centre of Funchal city.

A dream trip is surely a promise, drawing a line in the natural landscape of the João Gomes Stream Valley, home to an exotic and rare natural beauty. The panoramic view spreads to the delightful city of Funchal and to an overwhelming landscape, where the nature’s green melts with the ocean’s blue.
The entire project follows the highest standards of quality and safety, in agreement with the European and International rules.

In an antique property that belonged to the Reid’s family – Quinta do Bom Successo, situated about 3 kilometres from the centre of Funchal City – the Botanical Gardens have functioned since 1960 as one of the most famous Madeiran tourist attractions.
With an area of 35 thousand square meters, the Garden offers the visitors an unique visual experience.
The colours of 2500 exotic plants, from all continents, mix into a coloured mosaic, framed by the beauty and exuberance of Funchal’s amphitheatre. Divided into five main areas, the Botanical Garden, has an essential concern with the preservation of species. It has in its collection:

•  Arboretum – Plants from the Himalayas and Tropical Regions;

•  Loiro Park – shelters a notable collection of exotic birds such as Dwarf Parrots or parakeets.

Funchal’s Botanical Garden is thus a pedagogical centre, a pole for scientific divulging / evidence, and a centre for conservation, maintaining in its collection of living plants, species that are already extinct in their countries of origin.
In 1997 the Botanical Garden saw its area increased, which allowed the introduction, into its collection, of species with great botanical value. An example of which is the cicadaceas palm.
More recently it received species suitable for topiaries, i.e., diverse trees and ornamental shrubs. It was likewise graced with areas used for the plantation and exposition of orchids, for a viewpoint and as well for an amphitheatre.
Open every day from 9.00 a.m until 6.00 p.m (The last entrance is at 5.30 p.m)

The small village of Monte perched up in the hills overlooking Funchal, 6 km away from the centre of the capital, was formerly a health resort for Europe’s high society.
There are several words synonymous to Monte and ‘toboggan ride’ is surely one of them! Originally a fast means of transport down to Funchal for people living in Monte, these toboggan sledges appeared around 1850.

Still in use today, they attract thousands of tourists every year who want to make this exciting experience of sliding at high speed on narrow, winding streets down to Funchal. These two-seater wicker sledges glide on wooden runners, pushed and steered by two men traditionally dressed in white cotton clothes and a straw hat, using their rubber-soled boots as brakes.
The downhill journey to Funchal is made in about 10 minutes on a total course of 2 km, reaching at times a speed of 48 km/hour. Adventurous, yet safe, an ‘old-fashioned’ toboggan ride to make your way down from Monte is the perfect contrast to the high-technology ‘Botanical Garden Cable Car’ going up to Monte. Don’t miss out on it!