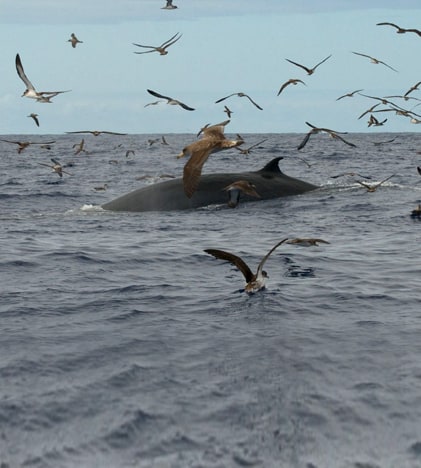 The location of the Archipelago of Madeira in the North Atlantic ocean is ideal for watching some cetaceans passing by on their migratory routes.

The only species present during all year on the Exclusive Economic Zone of the archipelagos of Madeira and Azores are the Sperm whales Physeter macrocephalus.

This species has circular migratory movements through the tropical and subtropical waters for females and immatures while males have pendulum movements that can reach the polar zones. It is thought that the individuals that occur in Madeira and the Azores belong to the same population.

The Sperm whale is considered a vulnerable species to Portugal as its population has reduced considerably for about 70 years (3 generations), until the early 80’s, due to the intense hunting activity, which nowadays is completely forbidden.

The following list are the whales and dolphins that have been recorded in Madeira and so might be seen during a bird, whale and dolphin watching trip in Madeira sea and the most probable season to see them, based on frequency of observations:

Common species to observe in Madeira:

Not so common species in Madeira:

Striped dolphin Stenella coeruleoalba – February to May and July to September
Rare species in Madeira archipelago: