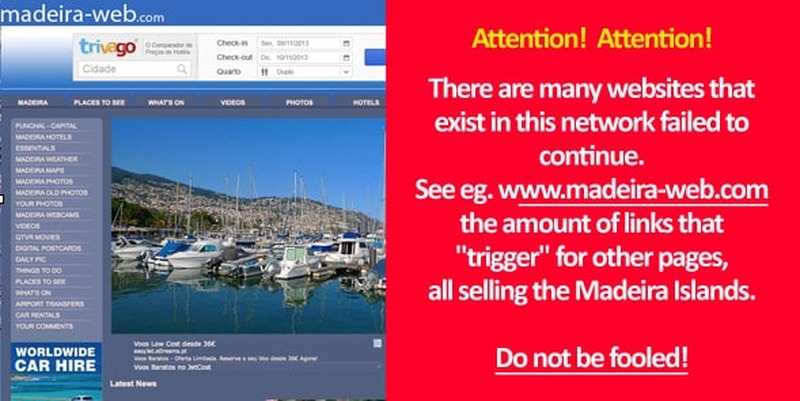 The company went bankrupt but the same sites are still active and selling so be very careful .

The Travel Agency ” Strawberry World ” which, as is well known, deceived thousands of tourists , making them believe that they had booked a hotel room but when we arrived here on the island, picked up the surprise of having to pay it all back .

Were made by passing hotels

As you know , just google the case Strawberry World , this agency was to pass by the hotels . Ie , they created a website with an address similar to the Hotel with his consent ( earned a commission per sale) , creating the false idea that the sites that customers were using were of hotels , thus , the tourists thought they were booking with the hotel directly , when in fact it was an intermediary to charge them money .

The business was going well either for business or Madeiran hospitality to the owner of Strawberry , but the broker started not paying the hotel creating an overall debt of more than € 4 million to start other businesses , and it was there that culminated in the closing of company . madeira-web.

Warning! You may think you are booking directly on the site of a hotel … but not!

Sites are still active
Customers have to be very cautious at the time of booking a hotel in Madeira , as it may think that you are booking directly on hotel websites , but can not be , can it be being scammed .
Even more incredible is that the company went bankrupt , no longer exists , but the sites are still active and sell stocks , which is nonetheless surprising. madeira-web
So you should be very careful because thousands of tourists were deceived and when they arrived to Madeira , had to pay again to stay.