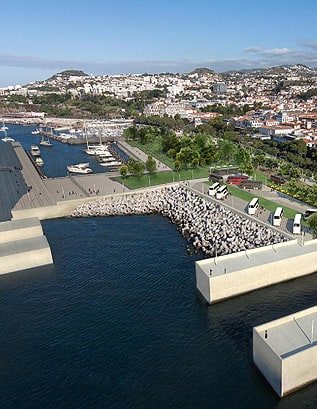 The Praça do Povo opened last November 8, 2014, giving a new image to the sea front of Funchal. Funchal grown and is more beautiful with this intervention was born the Praça do Povo, a work of the vice-presidency of the regional government responsibility. The last phase of the reconstruction front sea Funchal is the berth for cruise ships due to be completed next year in May. As a result of time of 20 February 2010 and due to the essential and urgent dredging of the end portions of the three rivers that flow into the port of Funchal, was necessary to set up a temporary deposit of inert east of the City Pier, between this and the mouth of the Ribeira de Santa Luzia.

Funchal has a new face

Funchal has a new face
The Praça do Povo located in front of the Legislative Assembly now has a huge recreation area with generous green spaces, with areas of stadia and footpaths surrounded by plantations. The project could not be opened to the public in its entirety, because of the need to leave a sealed part of support for the ongoing work on the new cruise pier, whose completion is scheduled for next year in May. The pontoons in the inner docking area will also be placed only on completion of the contract for the new dock.

Funchal Has A New Face