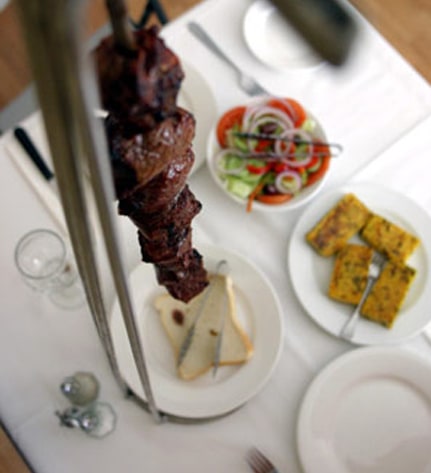 The island of Madeira has been known for its rich and varied cuisine which includes , in addition to other important factors , the presence of meat .

The menu was varied meat , served with chicken , cow , turkey, chickens , pigs , rabbits , goats , lacking the pork and hams , which are then animals from domestic breeding . Within this work only a few are highlighted , in particular the meat of chicken, beef and pork.

In the Convent of the Incarnation , the table of the seventeenth and eighteenth centuries was sick . Daily nuns gathered for two meals : dinner and supper , where the meat was plentiful , because the lack of fish in the local market not facilitated .

Previously, the chicken meat was also used for soups and broths usual . Sometimes spent the capoeiro homes in proclaiming : ” There are chickens sale ?

Discussed capoeiro The price of chickens and then collected them , hanging them by their feet on the stick, to walk into town to sell them . ” It was as , a chicken could be eight or ten patacas … ” ( Ornelas cit . by Woods, 1989) . were almost all to sell but who was ill was entitled to a chicken broth . it was a treat only for special days as the first octave of the ” Party ” , when all family members were invited to see the ” lapinha ” .

Today , there are still people who keep the tradition of raising chickens at home and have traditional chicken .

It is noteworthy the fact that it is common to use the term ” chicken ” to characterize the chicken (or rooster juvenile) , and this can be served plain , fried , grilled and even as skewered chicken. 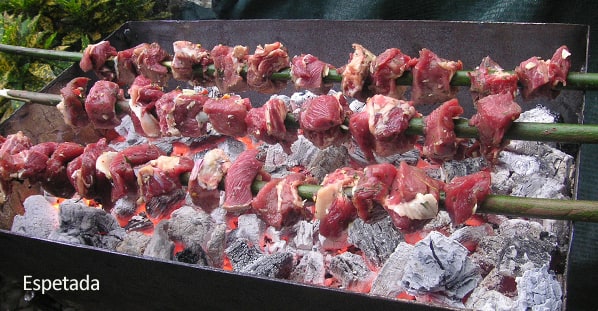 Meat lovers will find the island a large variety of dishes of beef ( veal or beef) , among which are the traditional kebab , made ​​into a laurel , where the meat is cut into small pieces ( small cubes ) , temperate with salt , bay leaves and garlic, and grilled on hot charcoal . This is always present in traditional feasts and festivals in Madeira . However , initially , the prick was popular among pilgrims and hikers , and they only ate the delicious skewered , and only later consumed by the entire population .
Fortunately , the standard of living rose in the late sixties , so much so that today “there is no family in any village of the island , once a week , do not buy beef for the meal or the holy day of Sunday .”

In the culture of tourism which became the Wood , from the second half of the twentieth century , the traditional kebab dish is indispensable Madeiran cuisine and specialty flagship , the worthy tourist attraction , typical restaurants on the island.

Although the prick to be a regional dish , its commercialization outside the religious festivities , ie restaurants, was born in the parish of the Strait . Indeed , in the fifties , Francisco da Silva Freitas , owner of a small bar, later transformed into the restaurant ” The Vides ” , broke this tradition by introducing secular in its bar jab as gastronomic specialty , ending by the other restaurants imitate and rapidly extend to the entire island .

For that reason , despite highly publicized throughout the island, the Câmara de Lobos is considered the birthplace of the skewered beef and continues to be the venue for those who want to enjoy this gastronomic specialty . It is so popular that many say (especially that area ) , or to go to the Strait Madeira and do not eat a kebab , is like going to Rome and not seeing the Pope .

Thus , it is quite common to find at present endowed with restaurants tables with iron structures , placed in the middle where they hang the skewers , after the well seasoned and grilled meat bits . The bits of meat are usually undercooked and with blood to drop , because ” it is more flavorful and tastes better ! ,” Say many popular .

Of beef , it was also customary in a refined recipe , preparing the language afiambrada , offal , liver , breeder and hand cow like jelly . The jelly hand cow was used as a tonic with sweet or savory .

Among the best-known dishes , deserves special importance , the famous meat wine and garlic or vineyard – d’alhos , concerning meat gastronomy Madeira .
This typical dish of the holiday season , has emerged as replacement Continental put cod in which pork cut into cubes will marinate in wine and garlic, there came the name.

This dish is then made ​​especially at Christmas time , normally December 8 , feast of the Immaculate Conception , or , on December 18th , ( the day of Our Lady of O or childbirth ) , and it gave still gives the pig slaughter , resulting in a get-together among family, neighbors and friends .

From very early parts of the pig that are traditionally exploited , such as his flesh , blood and offal , and even make up dishes this time and ” teeth ” , snacks usually made ​​with the feet and pig ears , as well as other pieces of salted meat .

Other dishes are made from the parts of the pig, and it is these , blood stew, the famous sarapatel , notably done with blood, lard and cooked pork liver , which, according to Santos , is increasingly in disuse . The prick of heart and liver , the breeder , the inwards , steaks liver, sausage and chaff , or the intestines , which is scalded to be eaten in soups or moganga watercress , are also widely used .

The day of slaughter pig , anxiously awaited by all , begins at dawn , during which a group of four to five men , some of them using the typical ear cap ( cap rustic wool ) heading into the sty , bind one rope around the neck of the pig , and then forward it out where, after holding it firmly against the floor , the killer hits him with a sharp blow of knife. The blood flows from the neck is then quickly retracted by the women , with a clay bowl or bowl on the other hand, is passed to fabricate the sarapatel , as already mentioned, after which butchers the animal’s body .

The next day , prepare the fevers , from the tenderloin, which will serve to prepare the traditional meat coming and garlic , served on Christmas Day .

It is noteworthy the fact that the ribs are removed chops , very tasty , ” and the hind legs of the pig prepares the ” roast beef in the oven ” ,” known for cooked to Madeira . Meats Of Madeira.

What is not consumed is saved at the time the salting and consumed throughout the year . The head is also used , as well salgadinha to be cooked later , “with eyes semilha cabbage and new .”

For people most cherished parish, family friends and compadres are reserved other parts of the flesh of the pig, these being the Toggle or bichaninhas . The day of slaughter pig , expected throughout the year is , since time immemorial , the feast par excellence , a day with much wine and food , dances, songs and despiques .

Reference must be made , and although they are not integrated in the previous classes , the mutton , which was common at the table convent and stately , the wild rabbit , used in wine and garlic and in stews , as well as the kid that stands out Easter, being popular with larger families .