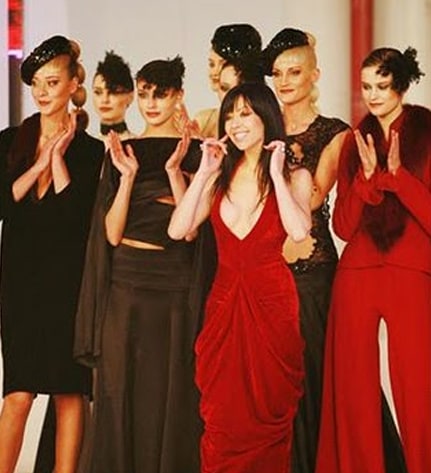 Fatima Lopes was born in Funchal, March 8, 1965 , and is today an international reference in the world of Fashion .
From the island of Madeira , raised in the city of Funchal . Since child showed an interest in the fashion world and during his teens , dissatisfied with the clothing that was sold in Funchal , started creating clothes for herself . Thanks to his fluency in foreign languages ​​, worked as a tour guide in Funchal for a travel agency.

In 1990 he moved to Lisbon in order to pursue a career as a stylist . In this city with a friend opened a shop called ” Versus ” , which sold mainly clothes from international . In 1992 the store’s name changed to ” Fátima Lopes ” . In September of the same year he participated as a creative fashion show held in a convent in Lisbon, where his proposals were well received .
In 1994 shows his clothes for the first time at the ” Salon du Prêt – à- Porter Feminin ” in Paris . The following year participates in major national fashion event , the ” Portugal Fashion” . Between 1996 and 1998 , Fátima began designing shoes and wallets either to the female audience , both male viewers .
In 1996 opens its first international store , in the city of Paris.

Since 1999 participates twice a year in Paris Fashion Salon , is currently the only Portuguese present. In 2000 causes great media attention by parading in the French capital the most expensive bikini in gold and diamonds , valued at about one million dollars .
In 2002 he was invited by Mattel to create a Barbie doll , has decided to play the doll bikini gold and diamonds used in Paris . In 2003 he opened his first clothing store in the United States , located in the city of Los Angeles .
In 2010 presented the program of sic ” Looking dream ” Face of the model eyear 2010 ”