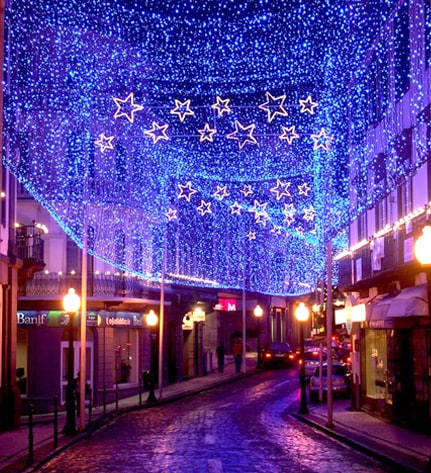 Christmas and New Year celebrations in Madeira offer a varied programme of cultural, folk and artistic events. The festive season starts in December when Funchal’s streets are magnificently decorated and the colourful lights are switched on in the city’s main streets until early January.

Holidays in Madeira at Christmas time
Madeira is the Christmas Party
Madeira traditions are to meet , get in the pine decoration at home, in the manufacture of typical delicacies of the festive season , to the religious rituals . Pagan customs of the religious , the Madeira has something to say and do . Wood has always lived with intensity the festive season , referred to as ” The Party ” .
In Funchal , the preparations for the festival began in mid- November with the Christmas lighting , transforming the capital of Madeira a real crib , with streets decorated and colorful , somehow forcing tenants to keep the decoration in the windows . In December , the works pass through the squares decorated with flowers , especially with Easter morning , holly and poinsettias . Adding to this, the central board of Avenida Arriaga becomes completely inviting , not just local , but especially outsiders to celebrate Christmas , with all its components , an ethnographic work of considerable quality .
Holidays in Madeira at Christmas time
In fact , the festive events on the streets of Funchal emerged in the 30s . In 1932 , we created a Commission of Party City , who ” for coordinating all activities of fun .” A body would be extinguished after the establishment of the Regional Government and the Regional Secretariat of Tourism , an institution that has set itself the organization of the Christmas and End – of – Year Madeira . Today , being a Region Madeira tourist coexistence between locals and foreigners is constant . As before, Christmas remains the family feast . In early December , prepare all the ingredients for the Festival and also marks the beginning of the Mass of childbirth that soon the early morning hours , in every parish gathers hundreds of people , living in excited , inside and outside the church, being a traditional tasting sandwich meat and wine and garlic broth , accompanied by wine, liquor or cocoa .
Holidays in Madeira at Christmas time
At home , the time of traditional dressings , including in many cases , the paint inside the house , for receiving family from other parts of the island. It is also the beginning of December we prepared cakes and scones with honey, and to finalize the liquors of different flavors . It is also the first week that fulfill the function of ritual death of pork .
Holidays in Madeira at Christmas time
The ritual brings together various elements of an offspring , neighbors and friends , each with a specific function that goes from simply driving the animal between the sty and the area where the death occurs , to the cut of meat . One part will be for consumption even during the Christmas festivities , but the biggest chunk will be cut and salted for preservation. Before the blood from clotting , throw salt and bless with a cross sign with a knife , so nobody give ” evil eye.” Properly seasoned with parsley and garlic , the blood is then cooked and served as a tooth ( snack ) accompanied by dry wine or brandy, while the pig is unbound and covered with gorse and heather to singe the hair on both sides . The use of the torch makes it easy . Chill with wet cloths , shave the skin and wash utensils rolled the carcass . The pig is hung upside down to be opened in half , stuck by its hind legs , along the tendons . Using a sharp knife and a meticulous cut , remove the remaining intestine and organs such as the heart, lungs and liver. Part of sliced ​​meats and offal, serve the meal of the day. A skewered meat on the bone , and meat in the pan , are made for all gifts that come with homemade bread , cooked in shell semilhas seasoned with oregano and yams, without missing the house wine . While all of the elements congregate , the most experienced in the court proceeds to bite (cutting and splitting ) : a bluegrass for meat wine and garlic Christmas , and the rest of the meat is salted , including the head, feet , ears , tongue and tail . The casings serve sausages ( tripe ) and lard is melted to save and use in preparation kitchen .
The night of December 23 have required passage by the Farmers’ Market in Funchal. In a festive atmosphere , thousands of people wandering up the interior and exterior of the market , some last minute shopping , fruits and vegetables of the season , plants for floral arrangements , while most simply seeks socializing . The stalls selling food and drink , extend through the streets surrounding the market , closed to traffic . Chicken soup , roast beef sandwiches and wine and garlic , are the delight of all .
On Christmas Eve , the Mass of the Rooster is traditionally attended by thousands of faithful . On returning home , gifts are exchanged and serve up in a family environment chicken soup and cakes party.
On Christmas Day , the culinary tradition of Madeira reveals different from rest of the country . Logo for breakfast, serve up sandwich meat wine and garlic and cocoa. At lunch , the chicken in the oven and roast pork loin , assume the preference of Madeira . As a rule , the best are chosen to house chickens , prepared eve . The cod and turkey have earned their space , especially in the younger generations and influence of large areas of food distribution .
The December 26 , ” First Octave ” , tradition dictates that the whole family lives together in their homes , a repast in re-entering the pork meat , including meat wine and garlic , cooked with semilhas and vegetables. A variety of cuisine relies heavily on home production and location . The roast beef , turkey, black swordfish and cod also makes up the daily menu .
Christmas , or Party, keep your spirit intact , more or less consumerism . Traditions still live with either mutation , on the streets or at home .

Holidays in Madeira at Christmas time – Picture
Madeira spends an average of nearly 2 million in the Christmas lighting
The Regional Government of Madeira usually spend a lot of money to keep as is usual at this date, the Christmas decorative lights mainly in the city of Funchal. The month of December is the most strongest in respect to tourism, there is a strong bet since after Christmas comes the end-to-year the largest mega tourist island.
[youtube id=”Jg_zZ0zAvEw” width=”620″ height=”360″]
What eat on Christmas Madeira and Porto Santo
Christmas is in the tradition confeccionarem are some typical dishes of Madeira and Porto Santo , as the flesh of wine and garlic and chicken soup . Besides these there are a variety of drinks and pastries very much appreciated Christmas and End of the Year .
One of the many attractions of Madeira and Porto Santo is its magnificent cuisine.
Madeira has many typical dishes of the holiday season from cakes , pies , candies , liqueurs , and as he could not miss the famous wine and garlic beef and chicken soup .
The garlic meat or meat and wine – vine d’alhos is one of the most popular plates and thus deserves special attention. This is a typical dish of the holiday season and emerged as a replacement to put cod , very made ​​on the Continent . The pork is cut into cubes and marinate in going to wine and garlic, hence its name .
This dish is usually made ​​on 8 December , the feast of the Immaculate Conception . Yet on this day there is a tradition of pig slaughter , resulting in a chat with family , friends and neighbors . Another dish too and made ​​known on Christmas night is chicken soup Madeira , served in small bowls or cups .
Besides the traditional dishes , there are other delicacies much appreciated as honey cake , the scones and honey cake typical family. The honey cake is perhaps the best-known delicacy of traditional Madeiran confectionery . It’s a cake rich and varied in ingredients , among which are the sugar syrup and spices .
The homemade liqueurs , also part of the Christmas traditions of Madeira . It is tradition for women to make liqueurs varied flavors , including aniseed liqueur , mandarin liqueur , banana liqueur , cherry liqueur , and cherry tintantum .
These liqueurs are usually accompanied with traditional pastries . Another tradition that still lives on today is the habit of putting the shoe on the fireplace to put presents. Currently , children still do very euphoric .
After Christmas comes the New Year’s party – Madeira Fireworks festival

New Year’s Eve is celebrated everywhere on the island, in hotels, restaurants, bars, and even in the streets. The highlight of the New Year’s Eve festivities are spectacular fireworks – set off from approximately 50 posts – that illuminate the skies over Funchal. This is a truly unforgettable event, which brings back a multitude of visitors to the island each year.
Fire Fireworks Madeira is unique . It is undoubtedly one of the best performances ever seen world . Perfect time to gather with family and friends . If you want to travel on Christmas and New Year be sure to consider a holiday in Madeira .
Madeira Island is one of the most sought after by foreign and Portuguese to spend your New Year’s Eve . December is a month full of festivities and traditions in the islands of Madeira and Porto Santo , Madeira Dig Festival from religious celebrations and Masses of Childbirth , and Midnight Mass Market Night .
Another event not to be missed is the fire fireworks the End of the Year , one of the best fireworks shows in the world.
The 31st of December is a day party in the region , in which family and friends move to Funchal to watch the fire firework that is accompanied by the rhythm of the background music. See the fire fireworks in the highlands of Funchal is one of the choicest options for islanders and visitors .
The view is stunning over the city of Funchal . Many cruises enjoy your stay in Madeira for moored and glimpse the spectacle of New Year’s Eve in Madeira . A bit all over the streets of Funchal join groups , all with their prog -rich pastries, homemade cakes and biscuits , sandwiches , snacks , liquors , dry wine and champagne .
At midnight on 31 December, the boats begin to beep and so starts the fire fireworks . It’s ten minutes fireworks in the skies of the city . At the end of the show , the party continues in the streets of Funchal , as well as bars , pubs and nightclubs . Take advantage of this special opportunity to spend your stay in one of several cottages Madeira and treat yourself to the greatest fire Fireworks World .
[youtube id=”NcHGIf3d8Eg” width=”620″ height=”360″]

Holidays In Madeira At Christmas Time