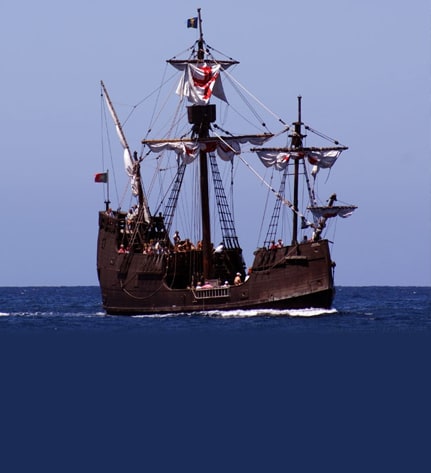 This magnificent replica of Christopher Columbus’s Flag ship
“THE SANTA MARIA “ was built on the island of Madeira, between July 1997 and Jully 1998, in the fishing village of Camara de Lobos by Robert Wijntje, a dutchman and by local craftsmen. In 1998, the SANTA MARIA represented the Madeira Wine Expo 98 in Lisbon, where she was visited by 97.016 people in only 25 days. Since then thousands more have sailed and continue to sail aboard the SANTA MARIA, experiencing more than just a normal boat ride.

The Santa Maria is also the most photographed boat in Madeira. Various television documentries both local and international have been made on board this famous boat, including Discovery Channel – “The quest for Columbus”.
The idea of this boat trip is to feel the history, while at the same time enjoying the breathtaking views of Madeira´s south coast. This really enjoyable trip is done on a daily basis, twice a day and sails off from the harbor in Funchal. The tour lasts for 3 hours and the sighting of dolphins and whales is imminent.

The Santa Maria Flagship
A great attention to detail was given to everything aboard the boat. Sailing along the coast of Madeira in the Santa Maria will undoubtably take you back to the 15th century. Join us aboard the Santa Maria and re-live Cristopher Columbus´s voyage of discovery and imagine how he and his crew felt as they headed into the unknown.

Whilst you are on holiday in Madeira we strongly recommend that you reserve a morning or afternoon for a trip on this wonderful galleon; to add to the historical reproduction even the crew are dressed in the traditional clothing of those long gone ages!

Feel what it was like to set sail on a 15th century flagship along the south coast of Madeira Island, while crew members (dressed up as pirates), serve the island´s traditional Madeira wine and popular honey cake (bolo de mel). During the summer, the “Santa Maria” will stop and allow it´s guests to go for a swim!