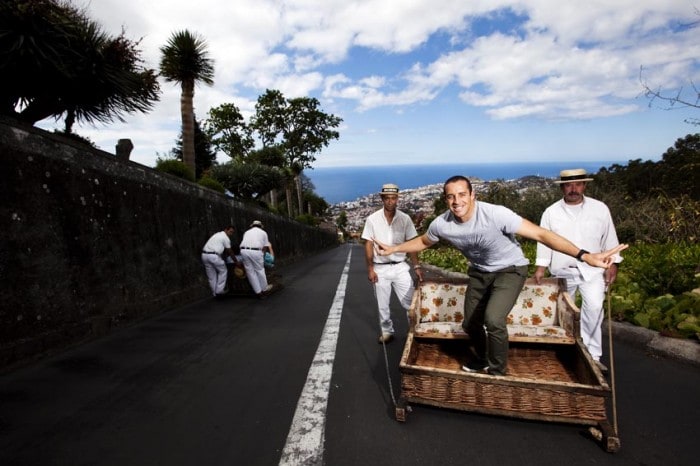 Excursions Madeira Island News
Imagine sitting in a comfy wicker chair. Imagine now that you are asked to stretch their legs and the lead, in the chair, for slopes that wind between old houses. A strange adventure? No, a fascinating journey that only wood provides.
It is the traditional trip Cars Basket, a different way of walking between two of the most emblematic places of the island, the village of Monte and the city of Funchal.
Are two kilometers of descent made ​​in about 10 minutes in traditional cars made ​​of wicker with wooden wheels moved by the power of two “paths” that can reach speeds above 50km/h.

Transport Oldest Madeira picture
The “paths” are characters typical of Madeira, always dressed with a white suit and a straw hat that lead these two baskets by decreases of places called “road train”, using their shoes as brakes for this unique form of transport .
The cars are a tradition Basket born in 1850, when they were the fastest way to travel between the elevation of Mount and Madeiran capital. With time were losing their utilitarian side but were gaining the charm and charm that attract many tourists nowadays to the place, which is almost an obligatory activity descent to all who visit the island. It’s a different way to experience the beauty of the city, something that can also make the air when you are climbing up Mount a 15-minute ride by cable car.
If you do not want to go down soon in cars Basket when you reach the village of Monte, known as the Madeiran Sintra, you can visit one of the most famous tombs of the island. Located next to the Church of Our Lady of Mount is the last abode of Charles Habsburg, the last Austro-Hungarian emperor, who after the defeat of their empire in World War I chose the island of Madeira as a place of exile.
[youtube id=”dloE_tQBFY4″ width=”620″ height=”360″]